When flood waters wash up memories of a refugee childhood 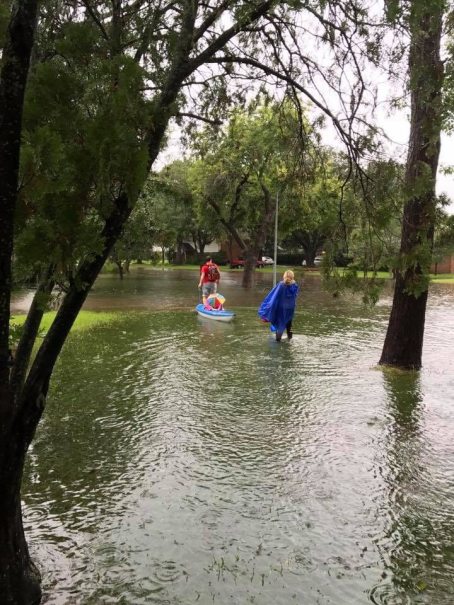 I couldn’t  cry during the flood, but I did beg. Please God, just don’t let my kids lose their home. Because I know what it’s like to not be able to go home.

When the water came to our doorstep, we forced our crying kids into a kayak. Alma’s eyes were so wide. She is seven. I wanted nothing more than to comfort her, to reassure her, but what was there to say? It was still raining. So hard. Suri, our three-year-old, screamed as I tore Lovie and Blankie from her pudgy hands. It killed me to take away her sources of comfort, but I couldn’t risk her dropping them in flood waters.  There was no time for negotiations. It was hard to think, and the rain just kept pounding down. It was so loud. Like a shower that you can’t turn off. I followed my husband and the kayak into the water. It penetrated my boots, my jeans, my soul. In my head, I negotiated and made promises to God. Please, just let us get through this.  There are no atheists in a flood zone.

I was Alma’s age when we left the Soviet Union. It’s all glimpses — the train packed with refugees to the ceiling, the feeling of falling asleep sitting up on a suitcase and then being jerked awake over and over again, the longing for my pillow, my grandma’s tear-streaked face as we said good bye.

We dragged the kayak up the street where kind neighbors welcomed us in. We dripped infectious flood water into their dry, warm home. They gave us towels and changes of clothes, snacks and a comfy couch. The kindness of near-strangers was sobering. I sat in their cozy living room in a state of half-shock, a million thoughts racing through my exhausted brain.

The rains have receded, but the flood of emotions has not. I remember the disorienting feeling of being a displaced child, of home being wherever you are at the moment. I had a Lovie then too — a ratty doll named Tzinzenella. Her smell, the texture of her hair, was home to me. I remember the excitement of waiting for my parents to unearth her from my suitcase, and the wave of nausea when I saw her head jerk back as they pulled out.  The Soviet customs officers had slit her throat. Yes, they slit the throat of a child’s doll. Because they are bastards.  But the worst part was that she smelled like a suitcase – she had lost the smell of home. Do you know what a flooded home smells like? A flooded house smells like sewage and mold. Any lovies touched by flood water can’t be rescued, their throats can’t be bandaged.

After what feels like an eternity of Hurricane Harvey — the storm finally moved on and the sun revealed a city destroyed. How disorienting to see the sun. How disorienting to put my home back together, dry, when most of my friends’ homes are a gutted pile of rubble. We came back to find that the rains had stopped an inch from our front door. But for hundreds of thousands of my fellow Houstonians, this was not the case. They are now living in shelters, at friend’s homes, or in rentals if they are lucky. We have the luxury of figuring out our next steps. So many people’s next steps are decided for them — demolish, cry, throw out all belongings, try to keep it together, remediate, fight anxiety every time it rains, rebuild. Months or years of displacement lie ahead of them.

In the heart of the storm, a friend texted me, “You will get through this, you are Russian!” It’s true that I draw on my parents’ Soviet strength at times of crisis, but when the flood waters rushed in I was not Soviet Strong, I was Houston Strong.  We all are.

The people of Houston need help – please consider making a donation to the relief efforts. Two great options for donating: https://www.youcaring.com/victimsofhurricaneharvey-915053 , or, to donate through a Jewish lens: www.HoustonJewish.org